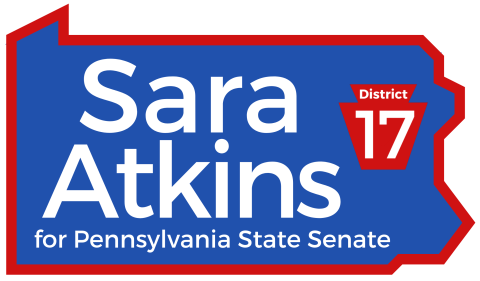 –
Kevin Tierney, More Than the Curve

"So who is running against Leach in the 2020 Democratic primary?

Sara Atkins (picture in the center above) is an activist from Wynnewood. She was part of the protest against Leach when he had an event at a Conshohocken restaurant. You can learn more about Atkins here."

For Jewish groups in Philly protesting Trump’s treatment of migrants, the spiritual is political

"... Sara Atkins, 39, has marched through the city, demonstrated at the Philadelphia field office of U.S. Immigration and Customs Enforcement (ICE), and helped immigrants navigate the court system. She is director of advocacy for Torah Trumps Hate, an Orthodox Jewish activist organization of more than 2,000 members nationwide that was founded soon after Trump’s election.

One of the signs members hoist at demonstrations quotes Leviticus 19:34: “The stranger who resides with you shall be to you as one of your citizens.” Another asks, “What would God say?”

The situation at the border and the tactics of ICE are "not Torahdik, not in line with Torah values,” said Atkins, of Wynnewood.

Torah Trumps Hate has helped immigrants at airports navigate immigration procedures, cosponsored protests such as one in February 2018 that advocated for Dreamers, and has mobilized members to attend more recent protests nationwide, including the July 12 Lights for Liberty march in Philadelphia, held on the eve of the Trump administration’s threatened ICE raids."

"Activist Sara Atkins was the first to enter the primary race in May, pledging to do a better job than Leach, whom she called distracted."

More Than a Year After Initial Report, Investigation Into Daylin Leach Concludes

"Sara Atkins, who is challenging Leach for his seat, released a statement saying that she was “very troubled to see that the investigation called for by Minority Leader Jay Costa today did not remove Sen. Daylin Leach from the state Senate and instead Sen. Costa is leaving it to Leach to resign on his own.”"

Leach responds to mounting calls for resignation: ‘Absolutely not.

"He is up for reelection in 2020, and already has one announced primary challenger — activist Sara Atkins.

In her own statement, she said she is “troubled” that Costa isn’t taking more aggressive action to remove Leach."

"One woman, activist Sara Atkins, has announced plans to challenge Leach in the 2020 Democratic primary. Atkins issued a statement through her campaign Thursday evening saying that she believed the women who said they have been harassed.

She said that she was disappointed that Costa was “leaving it to Leach to resign on his own.”"

"Sara Atkins, of Lower Merion, who has announced she will challenge Leach in the 2020 Democratic primary, also jumped into the fray.

“I am very troubled to see that the investigation called for by Minority Leader, Jay Costa, today, did not remove Senator Daylin Leach from the State Senate,” said Atkins. “The report shows a pattern of behavior that is by definition, sexual harassment.”"

"Her announcement video, “An Apple is Not Enough” highlights her focus on healthcare, specifically citing her children’s health conditions, along with targeting Leach for his sexual harassment allegations.

“When you’re the mother of five kids with complex medical issues, you know that an apple a day is not enough to keep the doctor away,” Atkins says in the video.

She details her role as an activist and being arrested 11 times for what she “believes in” and calling those to run if their elected officials are not listening to the community.

“When the lawmakers you’re screaming at aren’t listening, you need to vote them out,” Atkins says in the video. “When there’s a sexual harasser in your own backyard, you have to step up and replace them.”"

"“My daughter, the day after the (2016) election, she was 10 at the time, has a complex medical situation,” said Atkins. “She knows her situation. She looked and me and she said, ‘Don’t let him kill me.’”

“So healthcare has been the core of my fight,” she said. “Healthcare became something we had to fight to keep.”"

If you thought Mayor Jim Kenney was disengaged in the primary ...

"The 2020 Democratic primary in Pennsylvania is still nearly 11 months away, but Sara Atkins was eager to be first in the race to challenge State Sen. Daylin Leach’s bid for a fourth term. She introduced herself this week with a video that laid out her history of health-care activism and Leach’s political vulnerability."

Outside Washington, Pelosi neither says nor hears much about Trump or impeachment

18 Awesome Things That Happened To Jews In 2018

A DIFFERENT KIND OF ARREST REPORT: CIVIL DISOBEDIENCE IN DC

Mom of Five: Facing Arrest Worth the Fight for Health Care